Photo Finishing manipulations have been used from the earliest days of photography. No less a photographer than Matthew Brady in 1860 altered a portrait of Abraham Lincoln by adding Lincoln’s head to the body of political rival, Senator John C Calhoun of South Carolina:

The Daily Show crew would be proud & applaud M. Brady

By the late 1880’s Pictoralists had emerged in photography who used soft lenses, masks, and filters on the camera lens plus multiple exposures, burning and dodging techniques in the darkroom to produce  their images. Here is an example of a multiple exposure by Henry Peach Robinson from the era:

With the emergence of color films in the 40’s to 60’s a pictoral style resurfaced and emerged fully as Painting Photos with the Polaroid Camera images. Users manipulated the Polaroid images as they emerged with various palettes including gently heated forks and spoons . These Polaroid image manipulations became the forerunners of artistic photo painting:

As one can see above,  Photo Painting draws upon primal, Lascaux-like urge often to perfect and polish a shot but also to add bold colour and drama to a scene. So many of the techniques attributed to Photoshop are long practiced  film camera methods such as shading and tinting filters, multiple exposures, lighting mirrors & tricks and a huge  variety of  darkroom manipulations. So it should be no surprise a) that many of Photoshop’s first features like masks, layering, filters and effects were drawn from the darkroom and b) that  there is lots of software that delivers Photo Painting capabilities.

Any photo editor program worth its salt provides a number of paint brushes, layering and cloning capabilities. The Photofinishes has just done a review of  the free Photoshop clone, Art Weaver 4, which has a superior  set of cloning effects, brushes, and layering controls to perform very well as a Photo Painting app in Windows.The rich set of second Spring florals this year have proved to be the inspiration of some photo painting by ye editor.

Now photo painting can have several meanings in this digital age. Classically, one can take a photo as the starting point for a painting in watercolor , oil,  acrylics or other natural media. Then paint the image directly on canvas as  does Ron Windebank in the big and bold florals of his outdoor artistry as seen below: 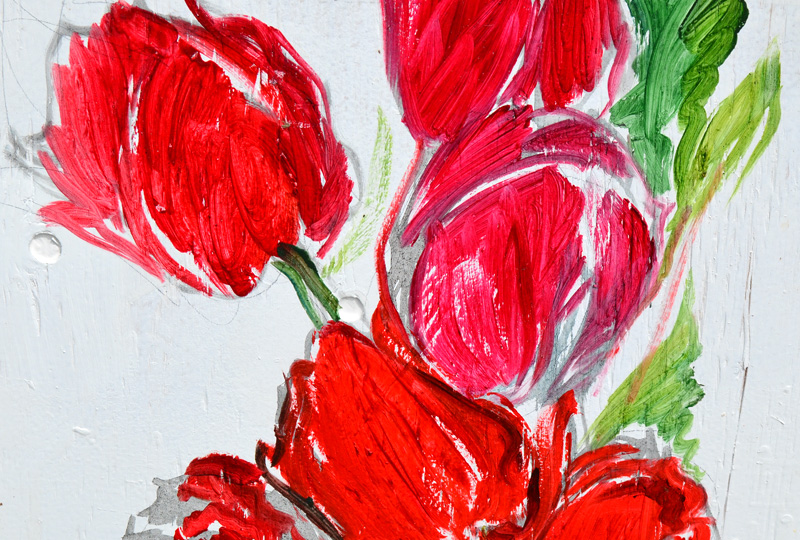 Working from a photo or real life is the artist’s choice – Ron alternates; but a colleague uses both. She takes pictures from many angles & directions “to preserve the colors and shadows” that have impressed her. Then she starts the painting using the real model. The diverse pre-taken photos “keep her on course while stimulating new viewpoints and ideas”.

Free Artweaver 4 digital painting software
Another method of photo painting is to use digital paint programs like Adobe Photoshop, Art Rage, Art Weaver [free download], Autodesk Sketcher Pro, Corel Painter, Fotosketcher[free download], Photo Filtre [free download], PsykoPaint, etc. The common features among these Digital Painters are 5 increasingly better functions:
1)Artist paint brushes. Typically the above programs have the following brushes:
Acrylics, Airbrushes, Artist Paints, Calligraphy, Chalk, Charcoal, Conte, Eraser, Felt Pens, Imagestamp, Impasto,  Oil pastels, Oils, Pastels, Pencils, Photos, Smears, Sponges, Watercolors. Note the use of the plural. Most of the paint programs support 4-10 additional properties for each of their brushes. So it is easy to make and save several brush variants. Corel Painter and Adobe Photoshop have the widest selection of brushes [several dozen] and the most properties plus brush variant creation tools for controlling the behavior of each  brush and your customized brush variants;

Photoshop CS2 Brush Variant – the Creation Panel
2)Layering capabilities so you can paint on a layer, move it up or down, hide it; and change its opacity and how it blends into the whole painting. These are the core 2 capabilities of a digital photo paint program;

Art Rage supports Trace Layers with cloner brushes
4)Scripts allow users to repeat stroking operations with different brush variant choices, positioning and colors on different layers. This allows an artist to tryout different rendering approaches and then choose the best one by turning layers off and others on. However this is an advanced feature available in products like Adobe Photoshop with Actions or Art Rage with Scripts.

Art Rage provides for painting scripts
5)Digitizing pens and tablets. The advantage of digitizing pens is that pressure, speed  and angle of stroke plus clicking on a pen triggers & controls selected properties of the brush in current use. In effect, digital painters have all their brushes automated when used with a digitizing pen just like a commercial airbrush.

Three things  become clear in this description of digital painting. First and foremost, just as in natural painting with oils or any other media, digital painting has a very large learning curve. In fact, it is probably even greater than for natural paint media because there are so many brushes, variants and brush properties at an artists’ disposal. And digital painters can and do mix media in their paintings.

Third, digital painting does provide through its many layers with  opacity and blending options plus undo/redo/fade capabilities, the opportunity to try quickly artistic combinations that would be either impossible or very tedious and/or expensive in natural media. So digital painting, seen through such outlets as games, animations and 3D designs, will continue to grow in the graphics and artistic worlds.

The still versatile Impressionist plugin
All of these plugins work on the same idea. The user makes a selection or mask on the image where the painting plugin is to be applied. Then the user invokes the plugin and selects a number of property settings which determines the painterly styling that will be rendered. As can be seen in the screen shot above, users have a great deal of control over the effect. Also there is usually a preview window/thumbnail that show the applied painterly effect.

The key here is the ability to mask off a portion of the image or to create a duplicate layer to apply the painterly effect on and then blend the painted layer with overall image using layer masking, opacity, and blend modes. The results can be unique graphic designs.

And there is a great deal of new interest in painterly plugins. Motivating that has been popular and free online and mobile photo editors like Fotoflexr,  Phixr, PicMonkey[mobile app too], Pixlr[mobile app too], SplashUp among other online tools. It is now easy to go well beyond Instagram in producing great looking images for social media sites like Facebook, Google Plus, Pinterest, Tumblr, etc.

Finally there is a wealth of plugins available for specific image effects such as brightness and contrast control, specialized blurring,  embossing effects, tesselation, symmetry slicing, etc. Just go into Adobe Photoshop Filter Gallery or Corel Paintshop Pro’s effects to see the range of filters available. Or go to the popular PluginsWorld website for their comprehensive list of commercial and free plugins.

The best way to illustrate what can be done with the wealth of Photo Painting tools is to show this Spring’s abundant blooms in full painterly stylings. Some are just before and after samples of painterly ideas. Others are 3 and 4 step progressions.
id=”4″]

If you are interested in finding out more about these painting tools and methods,  there is a free tutorial at the Quinte West Library in which ye Editor will provide an overview of Photo Painting and then a hands-on session in which you will have a guided tour using some of the popular tools mentioned here on your tablet or laptop PC: